Investment in Structures Falls Again in Third Quarter Even as US Economy Expands, Says ABC

The U.S. economy expanded at a 2.6% annualized rate in the third quarter of 2022, according to an Associated Builders and Contractors analysis of data released today by the U.S. Bureau of Economic Analysis. Investment in nonresidential structures decreased at an annual rate of 15.3% for the quarter and has now contracted in 10 of the past 12 quarters.

“Today’s GDP report could be considered the calm before the storm,” said ABC Chief Economist Anirban Basu. “Growth is likely to slow significantly going forward, but for now, the U.S. economy continues to expand as consumers keep spending on travel and goods, even in the face of significantly elevated inflation.”

“The major increase in borrowing costs in 2022 has yet to make its statistical mark on much of the economy, but real nonresidential investment in structures posted its steepest contraction since the second quarter of 2020 and has now declined in all but two quarters since the start of the pandemic,” said Basu. “For now, however, contractors remain somewhat upbeat about the outlook, and more than 47% of contractors expect their sales to rise over the next six months, according to ABC’s Construction Confidence Index.” 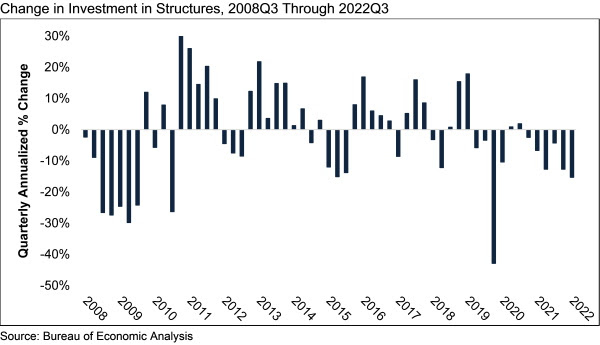