Construction Job Openings Up by 22,000 in July, Says ABC

The construction industry had 375,000 job openings in July, according to an Associated Builders and Contractors analysis of data from the U.S. Bureau of Labor Statistics’ Job Openings and Labor Turnover Survey. JOLTS defines a job opening as any unfilled position for which an employer is actively recruiting. Industry job openings increased by 22,000 last month and are up 38,000 from the same time last year.

Construction workers quit their jobs at a faster rate than they were laid off or discharged for the 17th consecutive month in July.

“Though we may have collectively experienced peak inflation, it is poised to remain unusually elevated for months to come,” said ABC Chief Economist Anirban Basu. “Many factors will keep prices high, including energy crises in Europe and China as well as a dearth of available skilled workers. Today’s JOLTS release is receiving considerable attention because many hoped that job openings would decrease for the second consecutive month in July.

“That did not come to pass,” said Basu. “Economywide job openings bounced back in July and remain more than 60% above pre-pandemic levels. According to ABC’s Construction Confidence Index, the share of contractors who expect to increase their staffing levels over the next half year remains elevated but has declined in recent months. As long as the supply of labor remains inadequate to meet the demand for workers, the industry will continue to experience upward wage pressures.” 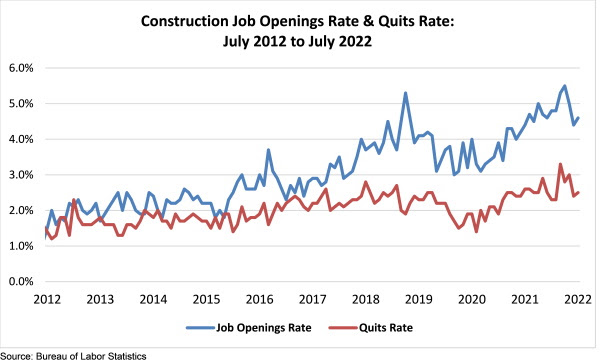