National nonresidential construction spending fell 0.7% in October but is up 1.4% compared to the same time last year, according to an Associated Builders and Contractors analysis of data published today by the U.S. Census Bureau. On a seasonally adjusted annualized basis, spending totaled $776.5 billion, 2.3% lower than the cyclical peak attained in April 2019.

“At this point, economic indicators are providing mixed signals about the U.S. construction industry’s trajectory,” said ABC Chief Economist Anirban Basu. “Today’s release suggests that the industry’s spending cycle is winding toward a close and has been for about six months. Yet, according to the October employment data or ABC’s Construction Backlog Indicator, the story is very different. Those data tell the tale of an industry still wrestling with enormous levels of work and ongoing labor shortages.

“Moreover, though overall nonresidential construction spending is a bit lower than it was six months ago, there are still segments that are performing well,” said Basu. “A number of public construction segments experienced solid growth on monthly and annual bases, including public safety, conservation/development (e.g. flood control), educational and water supply. With state and local government budgets still generally healthy, spending on public works will conceivably remain elevated for the foreseeable future.

“The primary source of weakness has been private construction,” said Basu. “This is consistent with recent readings of ABC’s Construction Confidence Index and a number of other leading indicators. Among the segments softening the fastest are the manufacturing and commercial segments, which are both down on monthly and year-ago bases. Commercial construction is down more than 16% over the past year, which coincides with the fact that 2019 will set a record for store closings in the U.S. as e-commerce continues to gobble up market share. Lodging and office-related construction has also slowed of late, likely because developers have already exhausted many of the best investment opportunities.” 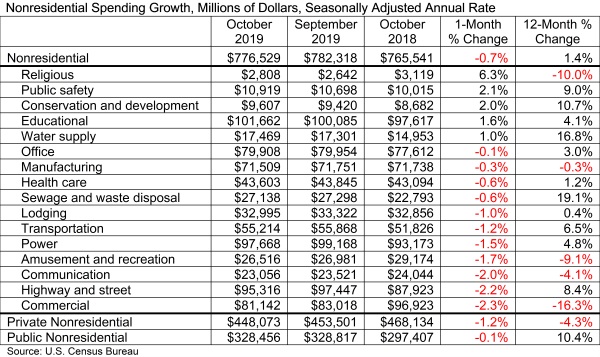 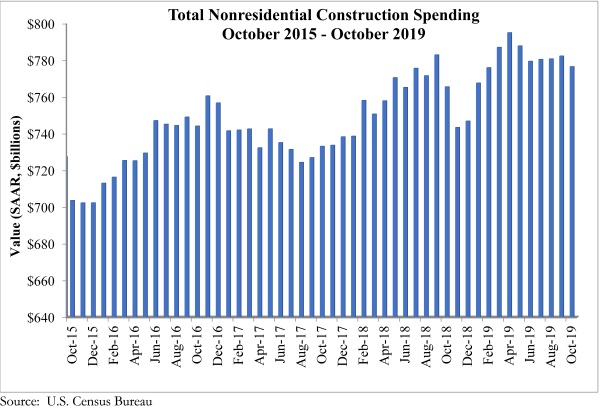