The construction industry added 10,000 net new jobs in October, according to an Associated Builders and Contractors analysis of data released today by the U.S. Bureau of Labor Statistics. On a year-over-year basis, industry employment has expanded by 148,000 jobs, or 2%.

Nonresidential construction employment increased by 4,000 jobs on net in October and is up 2.1% over the past year. On a monthly basis, however, both the nonresidential building and nonresidential specialty trade contractors segments lost jobs, which comports with the recent decline in investment in structures, according to the third quarter gross domestic product release.

The construction unemployment rate rose to 4% in October, up 0.4 percentage points from the same time last year. Unemployment across all workforce participants increased to 3.6% in October as the labor force participation rate for the broader economy inched up to 63.3%.

“Increasingly, the nonresidential construction sector is a tale of two industries,” said ABC Chief Economic Anirban Basu. “While the overall industry has added jobs for the past three consecutive months, the segments most closely tied to commercial construction, including retail and lodging, have slowed substantially. There are many reasons for this, including emerging concerns regarding saturation of available commercial product in a number of areas. Accordingly, the GDP report released earlier this week showed investment in structures contracted 15.3% on a seasonally adjusted annualized basis during the third quarter of 2019, a rather substantial dip. Today’s employment report indicates that the nonresidential building subsegment has now lost jobs on a year-over-year basis over the last four months.

“As a result, there is more money for infrastructure investment in a number of public categories, including water and public safety,” said Basu. “The expected depletion of the Highway Trust Fund in 2021, however, represents a looming threat to public construction momentum. The implication is that the overall nonresidential construction spending cycle may experience greater turbulence over the next 12 to 18 months, but for now, the data indicate overall positive momentum.” 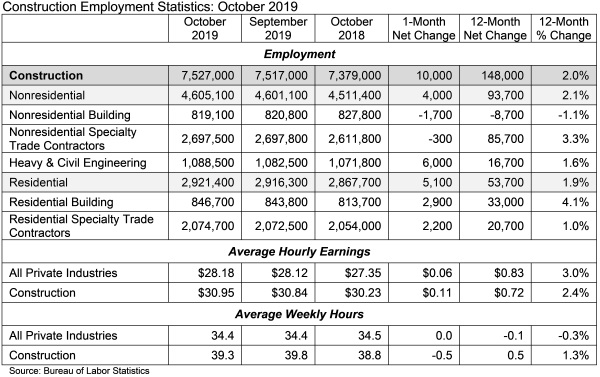 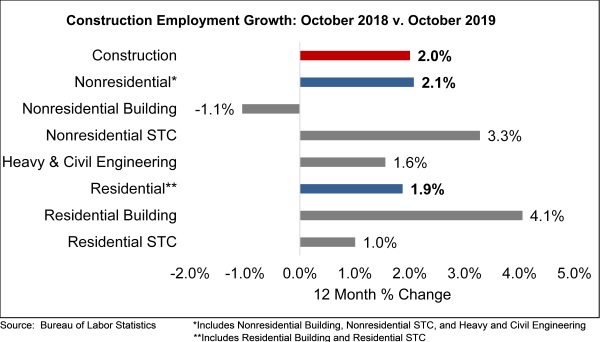