The construction industry had 371,000 job openings in October, according to an Associated Builders and Contractors analysis of data from the U.S. Bureau of Labor Statistics’ Job Openings and Labor Turnover Survey. JOLTS defines a job opening as any unfilled position for which an employer is actively recruiting. Industry job openings decreased by 52,000 last month and are down 21,000 from the same time last year.

“Today’s job openings data show that the U.S. labor market still offers abundant opportunity for jobseekers,” said ABC Chief Economist Anirban Basu. “This is true in many segments, including construction. Despite a decline in the number of industry job openings, 4.6% of all construction positions are still unfilled, more than at any point from the start of the data series in 2000 to the end of 2018.

“However, there are signs that labor shortages are beginning to abate across all segments,” said Basu. “The economywide share of workers who quit their job fell to the lowest level since May 2021, indicating that the U.S. economy continues to soften as it edges toward likely recession next year. Since many construction segments lag behind the performance of the broader economy by several months, it is conceivable that construction industry job openings will remain elevated for a time even as the U.S. economy weakens. This is reflected in ABC’s most recent Construction Confidence Index, which shows that nearly half of contractors intend to increase their staffing levels over the next six months.” 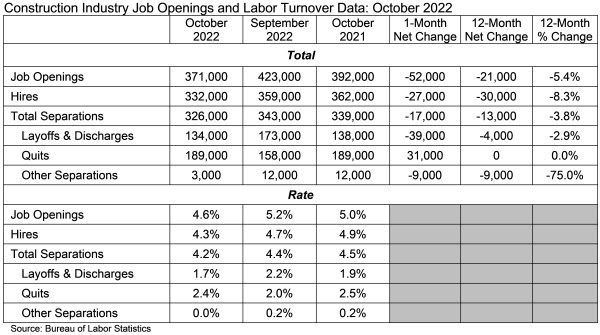 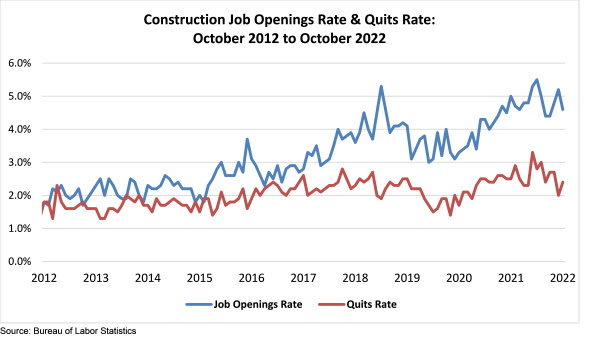