Overall, construction materials prices rose 0.8 percent over the previous month and 4.5 percent on a year-over-year basis, about three times as fast as overall U.S. inflation.

“A number of forces have aligned to produce meaningful increases in construction materials prices,” said ABC Chief Economist Anirban Basu. “Judging by recent hiring patterns, many contractors continue to be busy and  have healthy project backlog. The result is an increase indemand for materials.

“Recent storms have also likely contributed to rising materials prices,” said Basu. Given that rebuilding efforts are ongoing, this is likely to have some influence over materials prices for months to come. The ongoing synchronized global economic recovery is also likely to produce at least stable materials prices during the months ahead.” Moreover, global commodity prices have firmed, in part because construction activity in China is expanding once again. The result is oil prices hovering around $50/barrel and natural gas prices above $3 per million BTU.

“The International Monetary Fund recently upgraded its outlook for global growth both for 2017 and 2018,” said Basu. “The current year is setting up to be the best year for global expansion since 2014, and next year may be the best year since 2011. Growing worldwide optimism can be expected to translate into stable to rising commodity and construction materials prices.

“Additionally, there was a period during which the U.S. dollar was weakening,” said Basu.  “That period has ended for now, but input prices in September were likely influenced by then-prevailing currency dynamics. A trade dispute between the U.S. and Canada had also helped to push softwood lumber prices higher, though the price slipped a bit in September.” 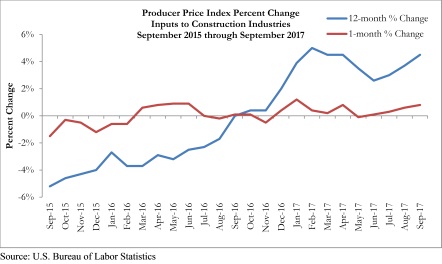