U.S. construction industry leaders remained confident in August 2019, according to the Construction Confidence Index released today by Associated Builders and Contractors. While contractors were less upbeat regarding sales growth over the coming six months, confidence associated with profit margins and staffing increased from July to August.

Despite slightly diminished sales expectations, nearly 63% of contractors expect sales to rise over the coming six months. More than half expect larger profit margins while about three in five contractors expect to expand staffing levels.

“Consistent with a healthy backlog and substantial demand coming from infrastructure-related projects, the overall sentiment among U.S. nonresidential contractors remains positive,” said ABC chief economist Anirban Basu. “While many economists are predicting the onset of recession over the next 12 to 24 months, the probability of a near-term recession in the economy’s nonresidential construction sector remains scant.

“That said, there is evidence of growing weakness in certain parts of the nation with respect to commercial activity,” said Basu. “The Architecture Billings Index and other economic indicators suggest some slowing in commercial construction, in part because of growing concerns regarding saturation in certain markets like office and lodging. The recent softening of industrial activity also helps explain why contractors were not quite as confident about sales expectations in August compared to July.” 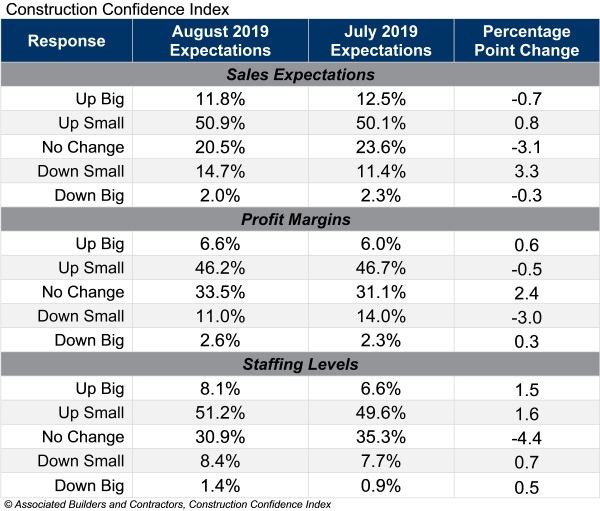 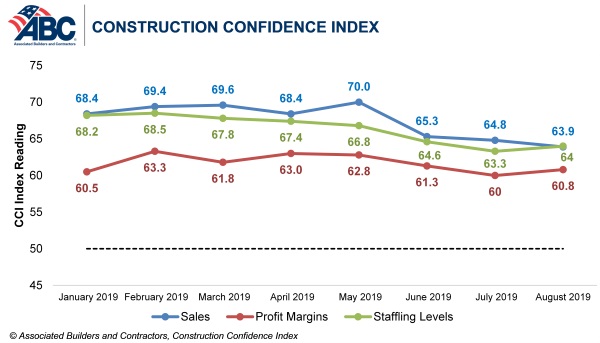