Confidence among U.S. construction industry leaders increased in November 2019 with respect to sales, profit margins and staffing, according to the Associated Builders and Contractors Construction Confidence Index released today. Sales and profit margin expectations reached their highest levels since May 2019, while staffing expectations reached their highest level since April 2019.

Three-quarters of contractors expect sales to rise over the next six months and, as a result, nearly 65% expect to increase their staffing levels, indicating that the average contractor will face even greater challenges recruiting and retaining talent through the first half of 2020.

More than 50% of contractors expect their profit margins to increase over the next six months for the first time since August 2019. Fewer than 12% expect margins to decline, strongly suggesting that demand for construction services remains elevated and purchasers are willing to pay enough to offset rising compensation costs.

“The U.S. economy retains significant momentum entering 2020,” said ABC chief economist Anirban Basu. “Accordingly, the nonresidential construction outlook remains stable. The duration of the economic expansion—already record-shattering—has more room to run. ABC’s Construction Backlog Indicator remained virtually unchanged at 8.8 months in November, and with job growth still apparent, demand for office and other forms of commercial construction will persist. Improved state and local government finances working in conjunction with ultra-low interest rates are helping to fuel additional spending in a variety of infrastructure-related categories, including water systems, flood control and public safety. Though there will always be reasons for concern, including those related to geopolitics, the achievement of a first phase trade deal with China and the new United States-Mexico-Canada trade agreement, which replaced NAFTA, should provide much-needed certainty regarding near-term economic prospects.” 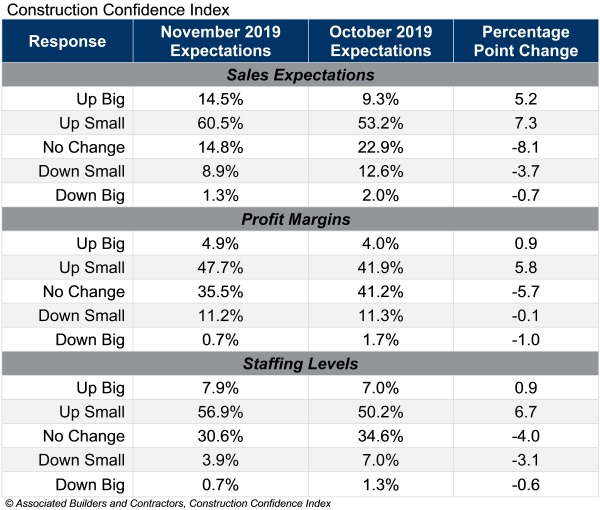 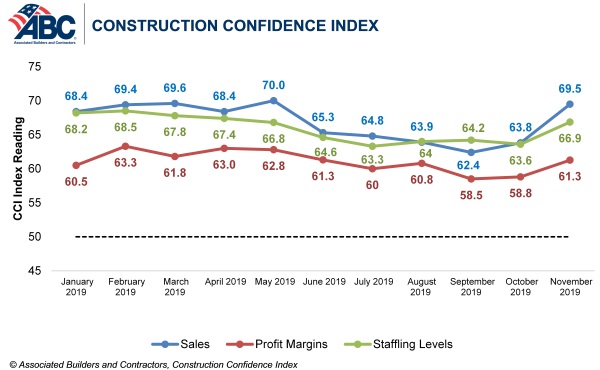