Leaders of the U.S. construction industry regained a degree of confidence in October 2019 with respect to near-term prospects for sales and profit margins, according to the Associated Builders and Contractors Construction Confidence Index released today. However, contractors became slightly less confident regarding their staffing levels during the next six months.

Despite large and growing skills shortages and rising compensation costs, nearly 46% of contractors expect their profit margins to increase over the next six months. Only 13% expect margins to decrease, strongly suggesting that demand for construction services remains elevated and purchasers are willing to offset rising compensation costs, including for subcontractors, which often face the most severe worker challenges.

Approximately 63% of contractors expect sales to rise over the next months and 57% expect to increase their staffing levels, indicating that the average contractor will face even greater challenges recruiting and retaining talent. The good news is that they are likely to be busy.

“The U.S. construction industry will enter 2020 with substantial momentum,” said ABC chief economist Anirban Basu. “Contractors continue to position themselves for a growing and more profitable marketplace with expectations of rising sales, wider profit margins and larger teams of workers. However, abundant risks remain, including in the form of increasingly volatile asset prices, a weakening global economy, massive levels of indebtedness in the United States and abroad, political uncertainty emerging from Washington and the impending insolvency of the nation’s Highway Trust Fund. But these risks have been in place for quite some time and, for now, the mood among contractors remains upbeat.” 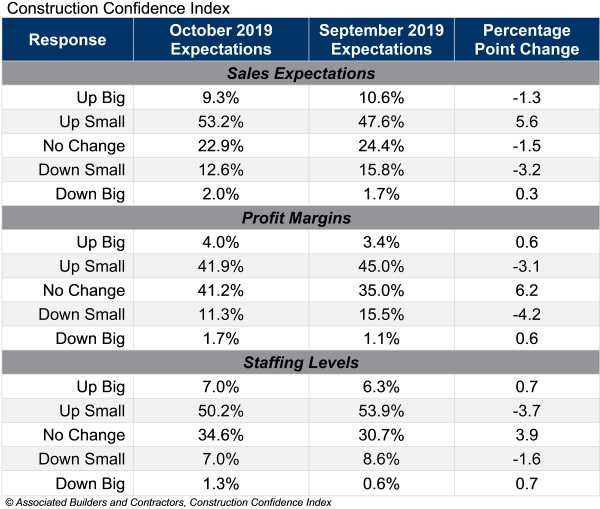