Associated Builders and Contractors reported today that its Construction Backlog Indicator fell to 8.4 months in December 2019, a 4.2% decline from November’s reading. This appeared to be due primarily to seasonal factors.

“December’s nonresidential construction backlog fell to the reading’s lowest level since January 2019,” said ABC Chief Economist Anirban Basu. “This can almost certainly be attributed to seasonal factors, which disproportionately affect smaller contractors. Backlog for firms with less than $30 million in annual revenue fell to 7.1 months in January 2019 yet rebounded for the majority of the year above the eight-month threshold. While backlog among this group once again declined to 7.1 months in December, there is every reason to believe that it will bounce back over the course of 2020.

Primarily as a result of these dynamics, backlog declined in three of four CBI regions in December. The Northeast and West regions both experienced a 1.5-month decline, while backlog in the south expanded by 1.2 months.

“Even seasonal factors don’t seem capable of softening construction activity in the southern United States,” said Basu. “Much of the region’s increase in backlog can be traced to rapidly expanding metropolitan areas such as Atlanta; Charlotte, North Carolina; Austin, Texas; Dallas; Orlando, Florida; and Nashville, Tennessee. It is often said that commercial development follows residential, and this appears to be the case. In an environment characterized by the lowest unemployment rates in 50 years, it is not surprising that expanding businesses are increasingly focused on Southern markets registering significant in-migration.”

Backlog for all three CBI industry segments contracted in December. While the commercial and institutional and heavy industrial segments experienced modest declines, backlog in the infrastructure category shrank by 1.2 months. Once again, seasonal factors are likely responsible.

“Backlog for firms in the infrastructure category has historically been more volatile than for other industry segments,” said Basu. “In general, the outlook for infrastructure outlays remains positive, especially as state and local governments continue to collect plentiful revenues and many states having recently increased their gas tax. Policymakers in Washington continue to float plans to invest in infrastructure, though concrete proposals regarding how they would be funded generally remain elusive.” 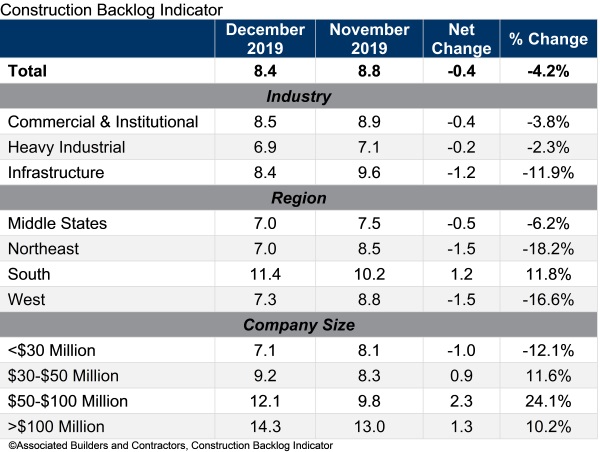 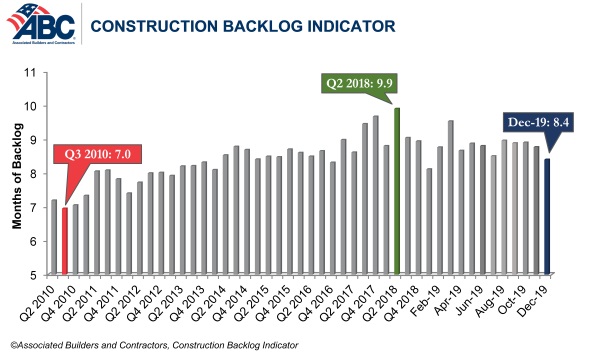