ABC: Nonresidential Construction Spending Increases by a Modest 0.8% in July

National nonresidential construction spending increased 0.8% in July, according to an Associated Builders and Contractors analysis of data published today by the U.S. Census Bureau. On a seasonally adjusted annualized basis, nonresidential spending totaled $847.6 billion for the month.

“The nonresidential sector continues to grapple with rising borrowing costs, elevated materials and labor costs and pervasive economic pessimism,” said ABC Chief Economist Anirban Basu. “Despite a modest increase in July, nonresidential construction spending remains below its pre-pandemic level. There is, however, at least one bright spot for the industry: publicly financed construction. State and local governments are flush with cash, and considerable funding is slated for various forms of infrastructure. In July, spending in the highway and street category increased 4.4%, while spending in the public safety category rose 2.3%.

“For privately financed construction, circumstances could get worse before they get better,” said Basu. “The Federal Reserve recently recommitted to further tightening monetary policy. Market sentiment quickly turned negative. Rather than disappear, supply chain challenges are proliferating in much of the world, including in Europe and China, and the risk of recession is elevated. This is simply not a set of circumstances conducive to rapid nonresidential construction spending growth, and according to the most recent Construction Confidence Index, just 31% of contractors expect their profit margins to grow over the next six months.” 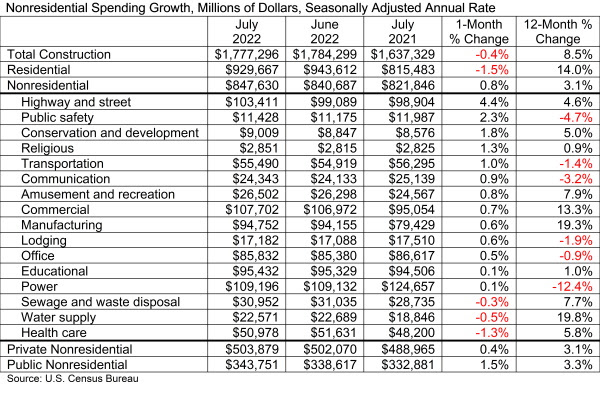 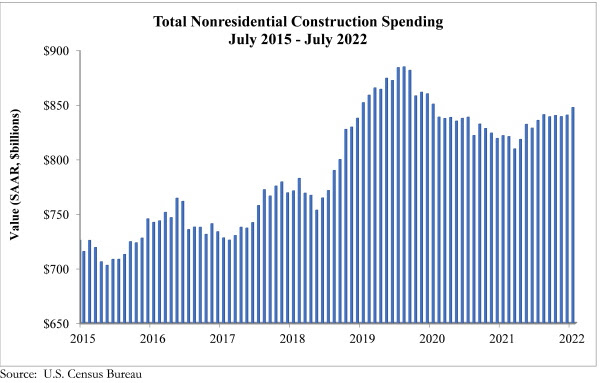